Groom’s Virtual Girlfriend Gets Smashed By Bride At Wedding 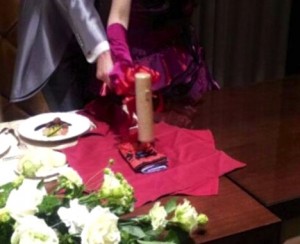 Many Japanese otaku (“geeks”) are known for their love of dating simulation video games, and even become emotionally attached to their virtual girlfriends. Even when one such Japanese man managed to land a real woman for a bride, he went so far as to invite his digital partner to their wedding, going so far as placing his Nintendo DS handheld system with the game inside at a reserved table seat for the reception.

The new bride was surprisingly understanding of the virtual girl, Nene Anegasaki of the dating sim Love Plus, attending their reception on November 24th. She probably knew what she was getting into when accepting the proposal of a man who works for Comic Market, the largest comic book convention in Japan. Unfortunately for the groom, his new wife had a surprise in store for him that brought an end to his relationship with the game.

In the spirit of cutting the wedding cake, the bride placed the game cartridge on a table and then produced a heavy wooden mallet. While she was originally going to destroy the virtual girlfriend on her own, the groom decided to take part as well. However, according to eyewitnesses, he still did so with tears in his eyes. From then, as they say, the couple lived happily ever after. At least until the husband got a new game to obsess over.