Boldly Marrying Where No One Has Married Before 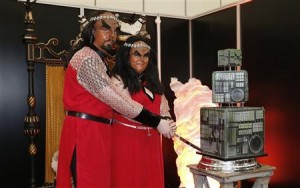 According to ABC news, the groom was inspired by a wedding that takes place in an episode of “Star Trek: Deep Space Nine.”

The bride and groom wore full Klingon makeup to their ceremony, which they conducted one day after their legal wedding ceremony in London. Check out the video above to see more from this Star Trek wedding.